The drying machine is a domestic electromechanical device that serves to dry textiles, shoes, hats, it can be part of a washing machine, it can be a separate device. The machine can not only dry clothes, but also straighten folds and wrinkles on it. The creator of the automatic dryer is the American Ross Moore. He began to work on his idea in the 20s of the 20th century, but the first truly effective device was released “into the light” only in 1938.

The device itself is quite simple, but powerful. The laundry is loaded into the inner drum, which, when turned on, begins to rotate. Usually the rotation speed is from 50 to 100 revolutions per minute. At the same time, loaded things are blown by a stream of air heated to 50—70 °. In some drying modes, the air does not heat up.

In the form of the removal of moisture machines are exhaust and condensation types. When devices of the first type are in operation, moisture is expelled out through the vent.In devices of the second type, the warm air is cooled after drying. The resulting moisture enters a special container, which simply pours out of the dryer. Drying programs are selected independently depending on the type of linen.

There are drying machines in the form of a cabinet, which are called drying cabinets, the principle of their operation is similar to the work of exhaust drying machines. 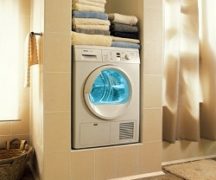 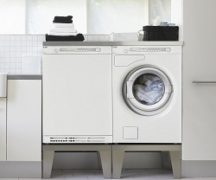 The principle of operation of the drying machine
Operation of equipment 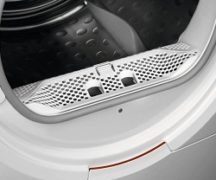 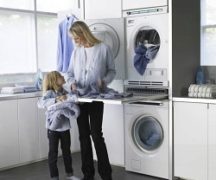 How to choose a machine for drying clothes
Choosing home appliances

The principle of operation of the drying machine
Operation of equipment

Why brushes sparkle in a vacuum cleaner
Repair of equipment