Scales — This device, with which you can determine body weight. Conventional household floor scales measure weight up to 180 kg. But there are meters that weigh loads up to 600 kg.

Scales are an ancient device. He appeared in the 5th millennium BC. e., as a tool for weighing. The prototype of modern floor scales is the invention of the middle of the XVIII century, invented and patented by the British John Wyatt and Joseph Ayer. A great contribution to the improvement of the device was made by the Russian inventor K. Prince, but he could not patent his works.

There are two types of floor scales - these are mechanical and electronic devices. The principle of mechanical action is built on a spring inside, which, under load, stretches and moves the needle along the scale of the instrument. The price of division in such a device is from 0.5 to 1.0 kg, which makes them inconvenient when weighing. Mechanical scales, unlike electronic devices, do not have additional functions.However, they do not need to be replaced with power supplies, and have a large load capacity.

For electronic models characterized by high accuracy. The instrument readings are recorded on the display screen, and the mass is measured with an accuracy of tenths of a kilogram. The latest samples of floor models are equipped with electronics, which can memorize the parameters of the last weighing, determine the ratios of various quantities, for example, analyze the percentage of fat mass in the body. 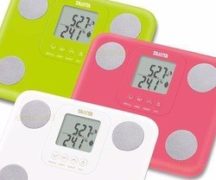 How to calibrate electronic scales
Installation of equipment
The most interesting

How to calibrate electronic scales
Installation of equipment

Which scale is better to choose: electronic or mechanical
Comparison of technology

Airbrush - a virtuosic tool for nail design
Other beauty equipment

Airbrush - a device for contactless makeup
Other beauty equipment