Steamer is a kitchen appliance used for making food thanks to steam. It will suit people who watch their diet and healthy lifestyle, because steamed dishes do not lose the important qualities of food - vitamins and microelements.

Steam processing of supplies originated in China, and already in the XVII century, the Frenchman Pape made a device similar to the modern steamer. It was a container with an insert similar to a colander. Products were put in there, the saucepan was filled with water and set on fire. Such pots and served as a prototype of the current double boilers.

The modern model has several grids on which completely different products fit. The vessel at the bottom is filled with water. When the device is working, the water is heated, and the resulting steam rises and fills the entire device, thereby preparing high-quality and healthy dishes.

The time of making a dish depends on the power of the device, which varies from 400 to 1800 W.Regular steamers have 2-3 cups, with a capacity of 3 to 4 liters each. There is a special bowl in which you can cook rice and even soup, since it has no holes. The steamer control panel is mechanical or electronic, equipped with a display screen. 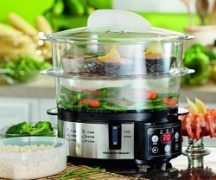 What can be cooked in a double boiler
Operation of equipment

We clean the steamer from scale
Caring for appliances

Rules and instructions for using the double boiler
Operation of equipment

What is better to use: mantovarka or double boiler
Choosing home appliances, Comparison of technology