The benefits and harms of the double boiler: what users say

Steamers - not uncommon in the kitchen. The reason for their popularity is ease of operation. They quickly and easily cook healthy food. Let's take a closer look at the last statement: is the food cooked in the apparatus in question considered so useful? If so, what is its use? And is it not capable of harming the body? What conclusion can be drawn based on user feedback?

How does the double boiler

If we take the most affordable models, we find out that their device will be as simple as possible. This is a tank (in the form of a sieve) with prepared products, mounted on top. Below, under it, is a container of liquid. There are more complex devices, but they work on a similar principle, distinguished by the presence of the second and third tiers, located above the boiling water. 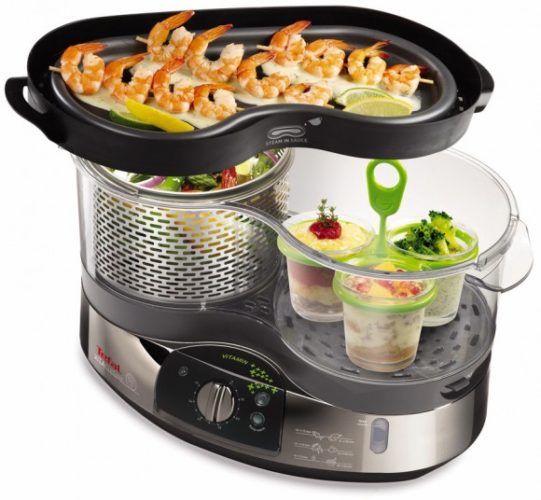 Among the many user reviews there is an opinion that the efficiency of steam boilers could be much higher if there were no significant loss of steam.

Electric steamers are considered most productive due to the increased tightness that rubber seals provide. The usual double boiler used on the stove is devoid of these parts. In an electric device, water heats up very quickly (the temperature can reach 100 ° C). Unlike a conventional pan, this steamer works with a steam generator.

Compartments for products are made either of durable (often opaque) refractory plastic, or of tempered glass (in expensive models). There are also models with partitions, so that in one container you can cook different dishes at the same time.

To ensure the free circulation of moisture, the products in the container are not laid out tightly. A blockage may result in some parts not boiling over, and the upper tiers will also receive less steam.

The bottom, the very first tier gets the most heat, so it is usually put products that require more heat treatment, and that cooks faster in the upper tier.

If you believe the statements of manufacturers, the benefits of the products prepared in a double boiler can not be overestimated, it is simply enormous:

To the positive qualities you can add simplicity and convenience of cooking. The device allows you to quickly cook several dishes at oncewithout standing at the stove. All you need is to load everything you need into containers and set a command (some models are able to cook several dishes automatically). In addition, the device allows you to experiment with different dishes, creating your own recipes, and even those who are far from cooking.

Using a double boiler, it will be difficult to spoil the dish, not dvar it or, conversely, overcooking. For a person, this function is performed by a timer. 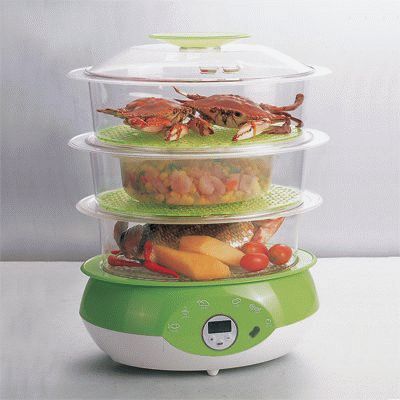 In short, the steam cooker and the benefits of its use are a topic for many discussions.

Like any other device, the double boiler has a number of nuances about which manufacturers prefer to keep silent and not to advertise them in advertising. Fortunately, these moments are not so much. Direct harm and a threat to health can be:

Dishes cooked in a double boiler have a rather specific (fresh) taste that not everyone can appreciate.

“Dignity.You can cook almost immediately, after turning on it takes less than a minute. Each container has a tray to collect moisture, it is convenient if it is not required that the juice drip onto the lower dishes. Water is enough for the entire cooking time (up to 60 minutes). In addition to the container for rice, there is a bowl for vegetables and a bowl of dark color so as not to stain it with beets. There is auto power off.

The bowls are opaque, but it does not matter. Anyway, during cooking, because of the steam and large drops, nothing is visible, besides you can look through the lid, it is transparent. Two tiers enough headlong for a family of four. I recommend to everyone!"

“Dignity. Price. Bought as a gift.

Bought as a gift. So far they have not complained, it is preparing and fine. I made a price, so I took it without hesitation. There are claims to the timer, there is no delayed start, but this is not critical. You can use ".

“Dignity. Easy to use, low price.

Disadvantages. Out of action on the third day. Plastic is very difficult to launder. Slowly boil, wash bowls for a very long time!

You can take it, but as lucky.

As you can see, a double boiler is an unusual thing, and its benefits and harms (or rather, the pros and cons) are the subject of numerous disputes and discussions. Of course, the device is not devoid of merits and demerits, and everyone is free to decide for himself whether this device is suitable for him or not.

Rules and instructions for using the double boiler

How to sterilize baby bottles in a double boiler
Technology news:

Rating of double boilers 2017: review of the best models based on user opinion and technical characteristics. Consideration of the advantages and disadvantages of participants in the rating.