Today, thanks to the specialists who offered its electric analogue instead of a wood-burning stove, you can not only heat your home, but decorate the room, because the electric fireplace in the interior is the dominant element that can say a lot about its owner.

What is an electric fireplace

In Russia, the history of the fireplace has a couple of centuries. It so happened that they installed them in the homes of rich boyars, and later, in the era of Peter I, already in the palaces. It turns out that since ancient times, the fireplace was an indicator of the well-being and wealth of its owner.

It is difficult to operate a traditional fireplace. It is necessary to monitor the condition of the chimney, clean it, which requires hard work.

An alternative to a wood-burning fireplace is an electric fire, which differs from a wood-burning one by the absence of a chimney. And the fire that we see when we turn on the device in the electrical network is not real. This was made possible thanks to the technology with which you canimitate himby passing on the screen. Heating of the room occurs due to the heat emitted by infrared radiation. But most often such fireplaces act as a decorative element, and not heating. 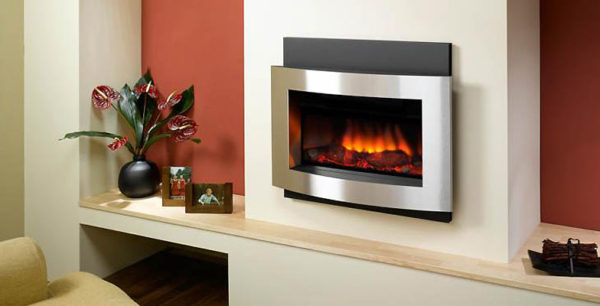 The advantages of technology

Guided by the method of placing the electric heater in the interior of the room, there are several types:

Wall mounted electric fireplaces are placed on the wall or in the wall, it remains only to correctly and beautifully arrange such an arrangement in the interior. Most often such devices are not deep, therefore, choosing them for installation in an apartment, we can assume that they will not require a lot of space. 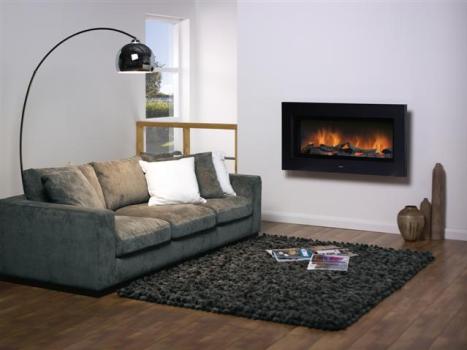 Walls - set along the wall. 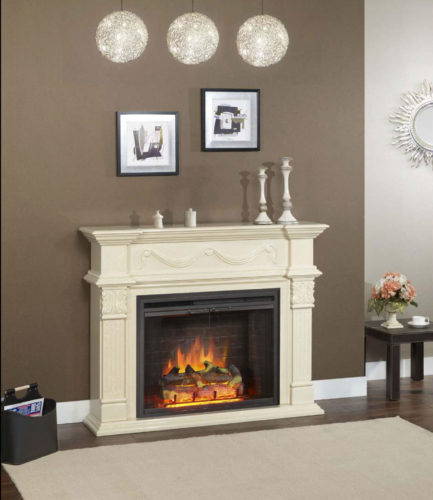 Island Fireplaces placed in the center of the room, so that the hearth can be approached from all sides. 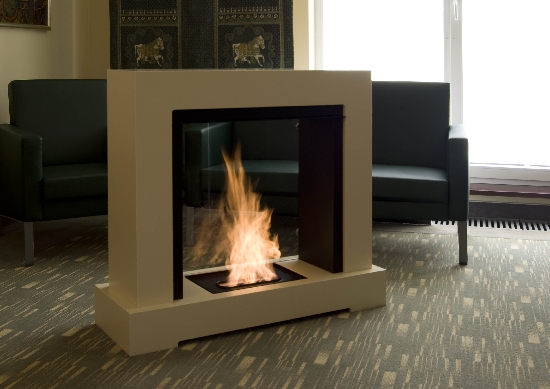 Corner. Despite the fact that this type of device requires installation in a corner of the room, do not forget that the fireplace is still the preferred element in the whole room design. 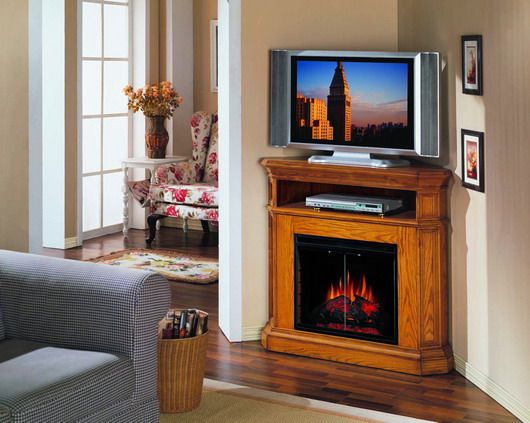 Built in fireplaces. The design of such devices involves embedding them in furniture or wall.To install the equipment in the wall, you need to prepare a niche in it, not forgetting about its framing. 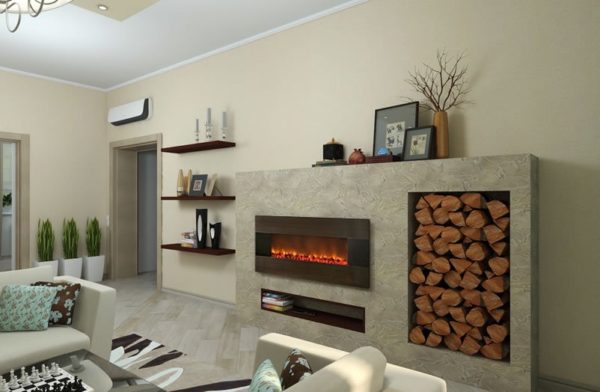 Mobiledevices do not require a permanent location, so they can be freely moved around the apartment, or taken away altogether, for example, to the cottage. 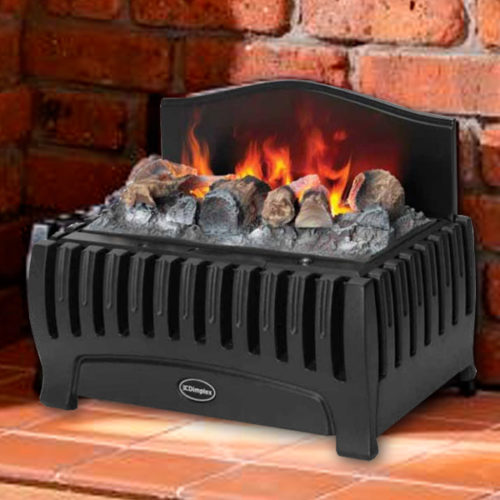 When choosing a future electric heater, their other important characteristics should be taken into account. For example, electric fireplaces can be not only a decorative element in the design, but also perform the function of heating.

Many manufacturers build sound simulations of crackling coals into their equipment in order to bring the owner of the electric fireplace as close as possible to the real feeling of burning firewood.

The maximum natural flame compared to that recorded and displayed on the electric screen will look installed. Fireplaces of the new generation are endowed with an electric hearth with a 3D flame effect.

Before purchasing such equipment, it should be noted that despite all the advantages that the owner of such an instrument receives, there are also disadvantages that it is important to know:

Properly selected and decorated portal sets the tone for the entire design concept. Electrofireplaces today are executed in various styles that allows to issue practically any design of the room with their help.

Putting a sofa in front of the fireplace, or chairs you can get a great place to relax, where you can read your favorite book, relax or lie down.

You can install an electric fireplace in the living room yourself, without resorting to the services of designers, you should only take into account a few simple subtleties. 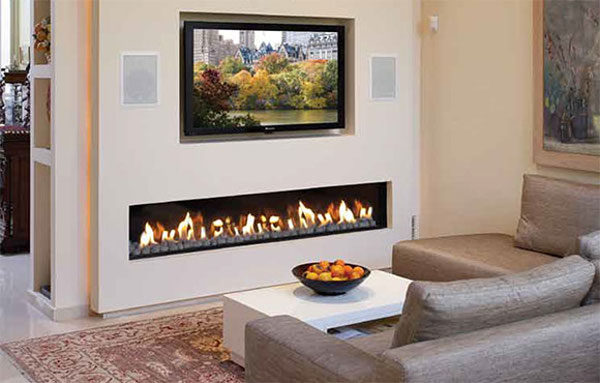 Definitely, such a device is able to attract maximum attention.Therefore, it is undesirable to place in this room any additional bright decorative elements that will compete in importance with the fireplace. The exception can be made to a television set by many over the hearth, which is not very correct, since these two objects will distract everyone’s attention .

When choosing a place to install a fireplace, it is important to consider the lighting in the room. It will be good if neither street light nor artificial lighting falls on it directly.

Making the living room in classic style, the electrofireplace should be chosen decorated with a stone or a tree. Based on the tastes of the owner, he can be both luxurious and more restrained. Above the focus, designers often recommend hanging a big picture. A fireplace area, on the advice of the latter, should be decorated with artificial stone or decorative plaster. On the floor it is amazingly beautiful in this case will look laminate or parquet. 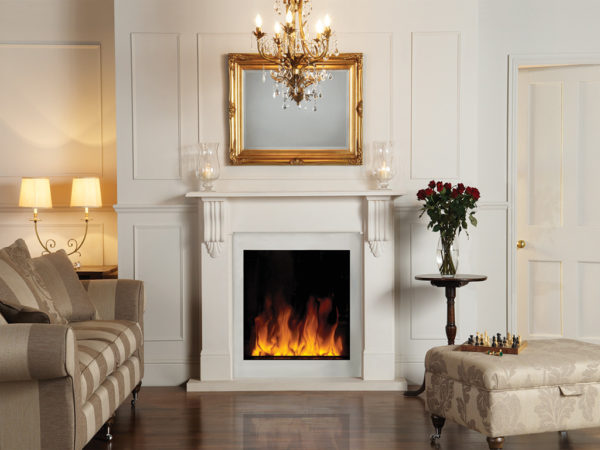 Insert fireplace in the living room country not problematic, because it will be perfectly in harmony with the high ceilings of the spacious room, especially if it is a country house. Over electrofireplace often hang weapons and trophies, obtained during the hunt. The fireplace area is decorated with stone or wood. 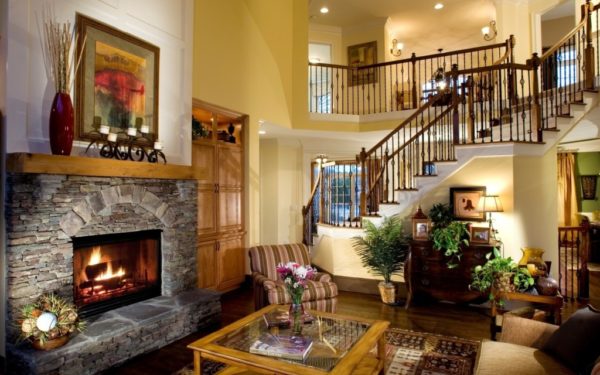 Electrofireplace with a clear shape and a minimum of finish to fit perfectly in styleshi-tech and minimalism. 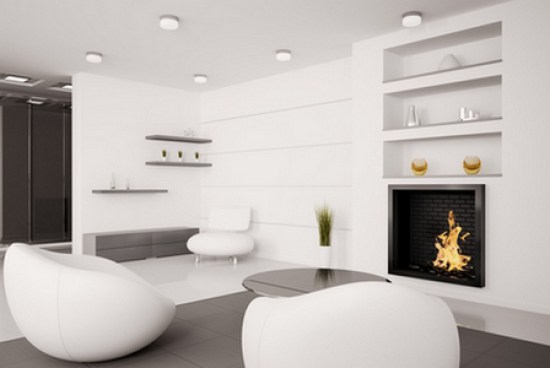 Modern electrofireplace - really universal, multifunctional element that can decorate the interior of any room. Everything else, it is a good alternative to the traditional fireplace for installation in city apartments, where it is almost impossible to install a chimney.

The big advantage of electric fire is the presence of the heating mode and the function of air humidification.

Today the market offers a wide range of such devices, made in different styles, which allows them to fit into the interior of any room.The main thing is to show your creativity at registration, and guests will appreciate this masterpiece, and will want to be your guest a little more, enjoying the warmth and comfort emanating from the fireplace.