New Sony - devices that do not look like everyone else

Sony is a famous brand that has something to be proud of. Among smartphones, the company is famous for displays, cameras, and sound. In addition, it is one of the few manufacturers that makes their phones recognizable, and they often differ in design from other market players. Among the novelties of the smartphone Sony in 2018 there are nice models that can suit even the most demanding customers.

In the modern world is clearly not enough smartphones with small diagonals. More precisely, they are, but most often in secondary brands that do not cause much confidence. This new 2018 year stands out against the background of other already at least its size. Its diagonal is 5.2 inches. FHD resolution, IPS matrix.

Important! The screen has a traditional aspect ratio, but the side frames here are quite thin. It looks nice and not old-fashioned, and for some even preferable, because today the dominance of FullView on the market. 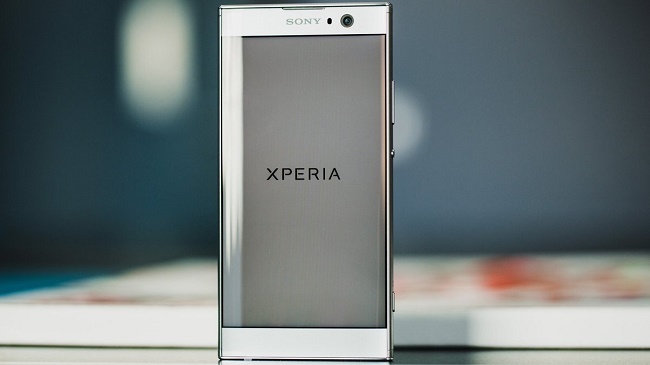 Model case - high-quality and pleasant plasticframe made of metal. The device is sold in four colors - black, gray, pink and blue. In general, the design has turned out to be strict, but thanks to several bright colors, it will suit those people who love something that is not too ordinary.

This novelty of Sony smartphones is a device that turned out to be in the top five with a small minus. It is designed for those who want to buy a quality device up to 30,000 rubles. Now the device has fallen in price, but at the start of sales, its price tag was about 26 thousand rubles. There are many competitors in this segment, but this is the case when Sony is a real competitor, and not something curious, but passing.

Above it was said that Sony Xperia smartphones are practically the only representatives of famous brands with small diagonals. In the responses, it is very often possible to meet the words that buyers want top stuffing in a small package. XZ2 Compact is just such an option.

IPS matrix, 5-inch diagonal, FHD + resolution. The device has thin side frames and rather wide bands at the bottom and top, but this does not cause any inconvenience. Plastic case with a metal frame. 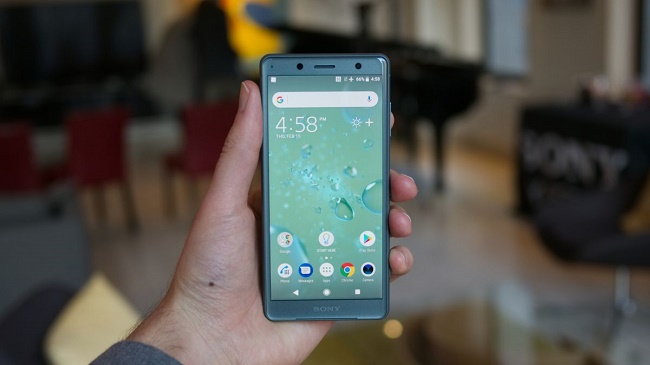 Important! In contrast to the devices of previous years, the angles have become more rounded in the novelty, and the front and back panels smoothly converge to the ends. Due to this, the sensations of the thickness of the body are smoothed out, but it is not the smallest.

The appearance of the smartphone and its size are important advantages of the device. But the other parameters also did not disappoint. Chipset - Snapdragon 845, 4/64 GB, camera - 19 megapixel, front - 5 megapixel. The device has IP65 protection, 2870 mAh battery, full set of the most advanced wireless interfaces.

This new product requires several observations regarding its parameters in order to make the understanding of the smartphone more complete.

The device has no competitors either at the current price tag or at the start of sales - 50 thousand rubles. There are no people who will choose the same stuffing and at the same time doubt - 5 inches or 6 inches. Usually, a person knows exactly what he needs in size, and then he looks at iron and other features. All those who need top performance in a small package are left to go to the store and buy an XZ2 Compact, there are simply no other options for them.

Another relatively small Sony apparatus, this time in the budget segment. The model has a diagonal of 5.5 inches, IPS matrix, HD resolution.The chipset is MT6737T, memory is 3/32 GB, a full set of wireless interfaces, the camera is 13 and 8 megapixel, the battery is 3300 mAh.

The model was made for fans of the company, who are not ready to give a lot of money for a smartphone. The body is completely plasticIn appearance it looks much more like old devices with sharp corners. The model is made in three colors - gold, pink and black, so, to taste there is an option for those who love something strict, as well as lovers of bright things. 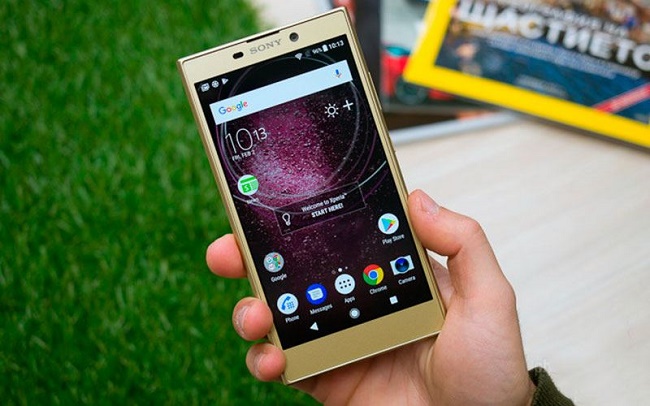 Important! With its price, the company did not save on wireless interfaces: there is NFC, support for the most modern codecs and other nice features. Do not forget to put a quick enough finger scanner.

Above mentioned that the apparatus created for fans of the company. This is true, at its price it is not bad, but for similar money competitors have models with better displays, a large amount of battery, and many will offer a more cool design. The model is not bad, but its problem is the competitors. This is the case when all is well, but there is better, and, most likely,when buying, a casual customer will simply take a look at the device and look at something else.

Smartphone is the flagship of 2018 and the company has Sony. The model came out half a year after the XZ2. Global changes in it did not happen. Here stands OLED display with an increased resolution of 2880 * 1440 with a diagonal of 6 inches. The company does not say the supplier of the matrix, as it buys them from both LG and Samsung. The body is made of metal + glass. The device has an updated design, that is, here rounded edgesthat makes ergonomics better, and the overall look more modern. 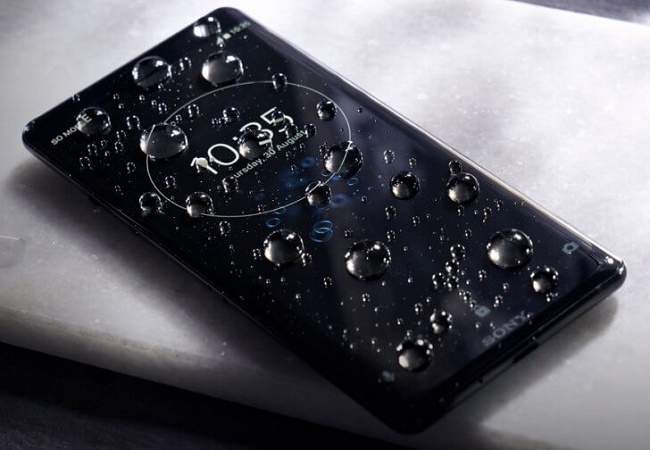 Important! Sony is one of the few brands that did not switch to the 18: 9 aspect ratio, but the framework is thin. The model has no cutout, and single cameras are installed. This device seriously stands out against the background of other devices.

Colors look nice too. They are called ornately, but if you speak human language, then these are white, black, green and burgundy options.

The camera has all the same buns as before - these are slow-mo, 3D portraits, 4K video with HDR.The smartphone has fast charge, but separately you need to buy a special power supply. Similar situation with fast wireless charging - need special accessories. Price - 70 thousand rubles. 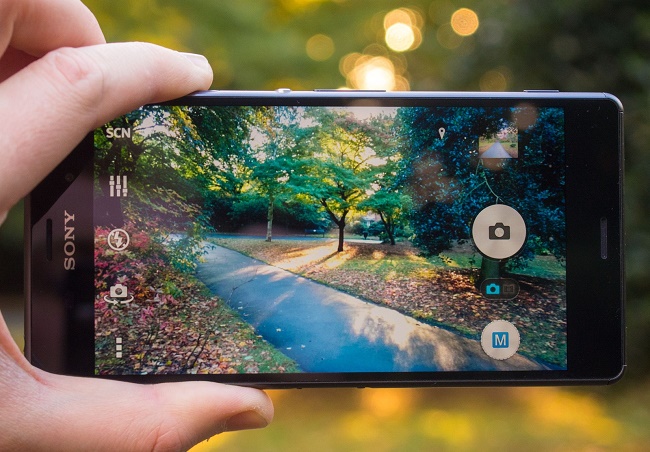 The smartphone turned out very cool. There are no cons, but it costs too much. Against the background of Samsung and Apple, which have almost similar price tags, the device does not look more interesting, which means that its competition is very tough.

There are already a lot of news regarding the new products of 2019 smartphones from various brands, but Sony continues to be silent, and we can only guess what will be offered.

Of course everyone is waiting the next flagship XZ4. There is no information about him, but, most likely, the emphasis will again be placed on the camera. Previously, Sony did not put dual cameras, and it may happen that something like this happens in the flagship of next year. Obviously, the device will not bypass the trend 5G technology support. Most likely, the model will be the next generation of Snapdragon chipsets, and the logical increase in memory will look like.No other information and no guesses about the new product. 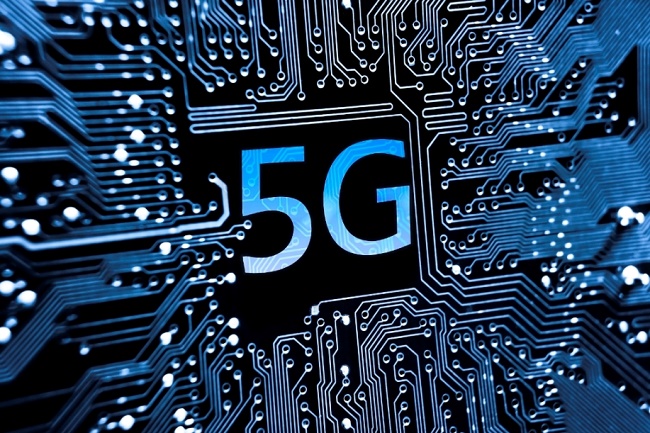 On the background of announcements of new smartphones with flexible displays, sliders, a large number of cameras, rumors about a new Sony concept appeared. Here work is being done with the appearance, and it is believed that model screen will be translucent. How it works, and what it is - is unknown, but it sounds intriguing.

On a note! There are also rumors about Sony Xperia Z Pureness, opinions diverge - this is either the same device with a translucent display, or it will have two displays based on the example of the Meizu flagship, only the screens here can be the same size.

Recently there have been renders of new products in 2019 of the budget and medium segment of Sony - XA3 and L3. They show that both smartphones look more modern, they will have very thin frames, and both models can also be equipped with a dual main camera. From these short videos it can be seen that the fingerprint sensor will be mounted in the power button. As far as all this is true, it is too early to argue, but the models were created by Steve Hemmerstoffer. And this is a person who often guesses the characteristics and appearance of a smartphone before its official presentation.

IPhone XS Max - the largest and best smartphone in the history of the brand
Technology news: