Model Lenovo Z5 released on the market in 2018. It should be noted that in recent years, the company was not pleased with the release of new smartphones and gradually began to be forgotten by buyers. To remedy the situation, Lenovo decided to launch an aggressive advertising campaign for the upcoming new product. They promised and 4 TB of memory, and absolutely frameless display. However, on June 5, 2018, the smartphone was officially introduced and caused great public disappointment. The result was a full-screen 6.2-inch device with the typical for 2018 design and technical equipment of the average price level. Despite unfulfilled hopes, the model came out quite good, for more details about it - in the Lenovo Z5 review.

The Lenovo Z5 model is made with a new-fashioned Aspect ratio 18.7: 9. This approach allowed developers to endow the device with an overall display that takes up about 90% of the front panel area. Not without iPhone X style cutaway. It seems that all the Chinese vehicles of this year decided to repeat this design. 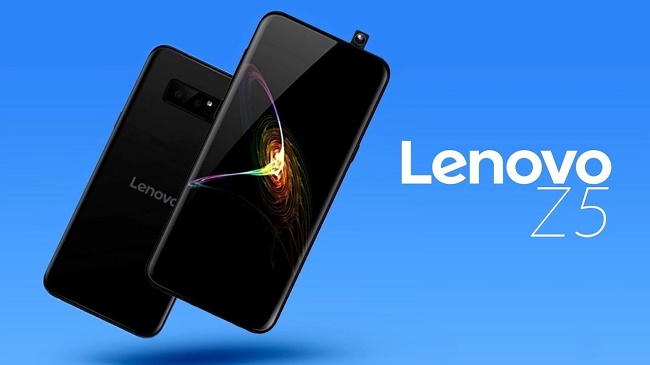 The main specifications of the smartphone are shown in the table.

Smartphone Lenovo Z5 comes packed in a white cardboard box with red accents in the design.

Inside the packaging, the buyer will find everything necessary for the full operation of the device: 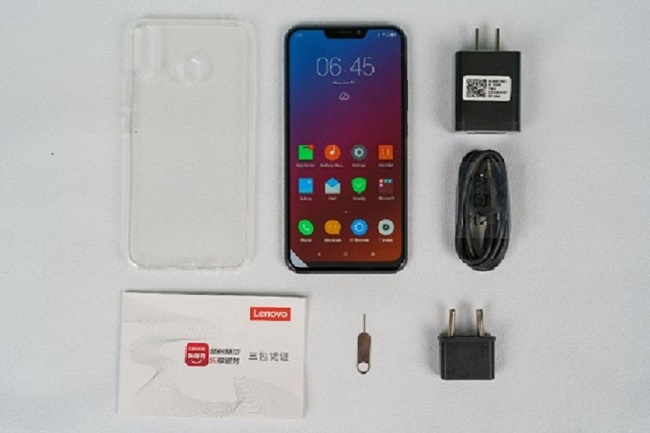 On a note! Interestingly, a small so-called “bang” in the center of the screen of the Lenovo Z5 smartphone turned out to be slightly less than other gadgets with a large diagonal and new-fashioned aspect ratio: iPhone X or Xiaomi Mi 8, for example. Inside the aforementioned “bangs,” the manufacturer has placed a telephone speaker, sensors, and a self-viewing camera eye.

Case of the device Lenovo Z5 Made of durable 2.5D glass Corning Gorilla Glass with aluminum framing. The back panel has beautiful modulations in the style of Honor. However, glass smartphones have a common misfortune: they quickly become covered with fingerprints and scratches. It is recommended to immediately put on a transparent silicone bumper provided in the box, or any other case to protect the surface from accidental injury. 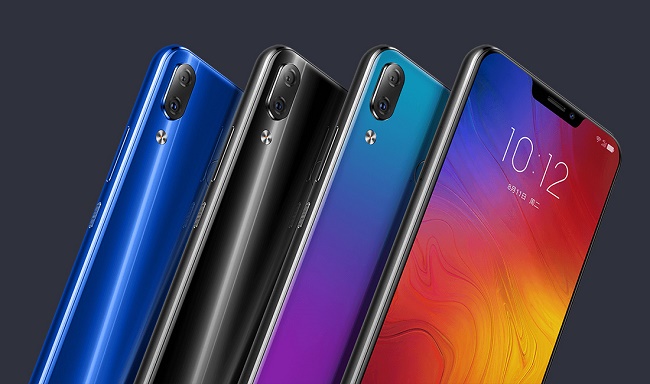 On sale you can find the gadget in 3 colors: black, blue, and purple-blue under the beautiful name "Aurora".

Location of controls and ports standard for modern phones.

The architectural basis with a sufficiently powerful processor and 6 GB of RAM provides the smartphone with fast and smooth work with most applications, viewing video without suspensions, as well as average level of performance for games that are particularly demanding of hardware. In the benchmark Antutu smartphone scored 116 thousand points, which is the norm for a budget gadget.

Sound quality through external speaker is average, while listening to music, there is a lack of low frequencies. Better sound is played through a wired headset. 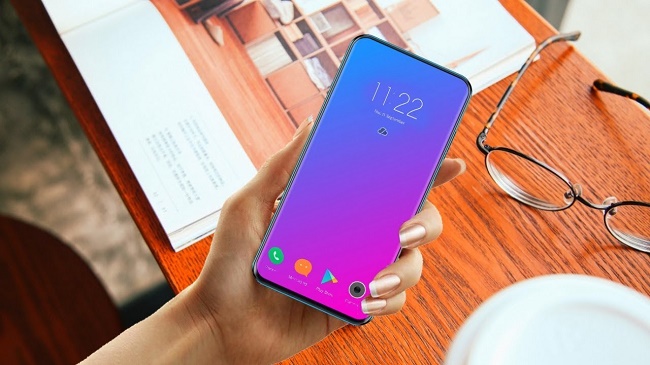 The display of the model is a classic IPS, demonstrates excellent image quality. The colors of the pictures are vivid, natural and moderately bright. There are no problems with viewing angles. Thanks large and high-quality screen the gadget is well suited for watching movies, videos, working with photos

The phone works on Android 8th version with proprietary add-on ZUI. According to the developers, this version of the add-on optimizes power consumption, increases the speed of work thanks to the built-in AI (artificial intelligence). They promise that the smartphone will be able to stay fast for several more years, but time will tell how much this is true.

Tip! If the external memory of 64/128 GB is not enough for the user to store the content, a hybrid slot can be used that supports the installation of either a SIM card or a MicroSD memory card with a capacity of up to 256 GB.

The autonomy of the device

Presented in the review, the Lenovo Z5 smartphone is equipped with a 3300 mAh battery. Despite the standard capacity, the battery does the job of powering the energy efficient processor, display, and other volatile configuration items. Smartphone stand up to 10 hours of video viewing with a bright half of the screen, as well as up to 6 hours of gameplay.

Important! Charging the gadget from the network through the 18 W power adapter (included in the package).The fast charge system supports the restoration of the full energy reserve of the battery for 1.5 hours.

Photo and video capabilities of the mobile device

Despite the dual main camera module with 16 and 8 megapixel lenses, the aperture of both f / 2.0 arrays is insufficient for shooting in low light. Having an LED flash does not fully solve this problem. Also, the camera is devoid of optical stabilization. The owner of the device can count on high-quality images only in conditions of good lighting.. Then the photos are obtained clearly detailed with a natural transfer of color shades. 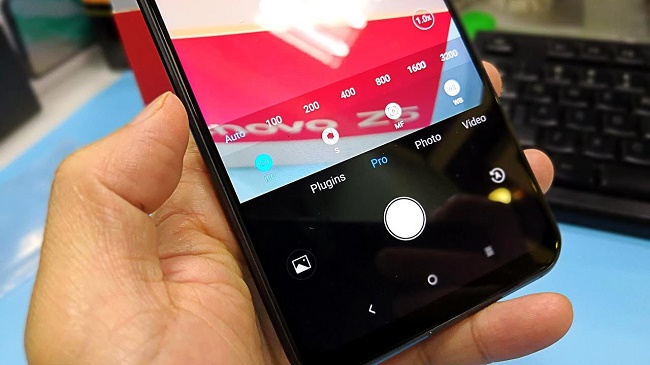 The presence of a dual lens allowed apply when shooting bokeh effect. The HDR system, used in the equipment of the camera, evens out color inaccuracies, improves the detail of the elements that make up the subject. 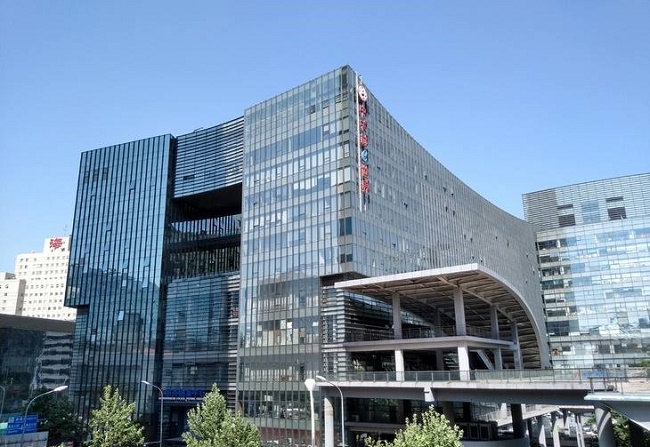 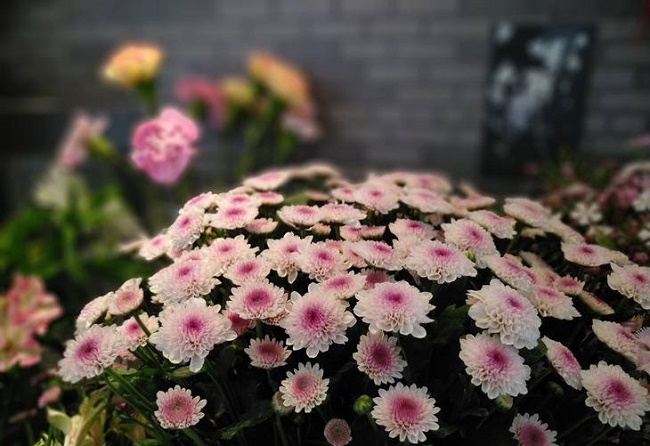 Well in normal light conditions, the front camera also shoots. The lack of flash and backlight screen makes it impossible to get good pictures at dusk. However here there is a certification, allowing to improve self-portraits. Both cameras record video in FullHD quality at 30 frames per second.

For an affordable price of $ 202 and $ 281 for the version with a memory configuration of 6/64 GB and 6/128 GB, the smartphone in question looks decent. Judging by the reviews of voluntary experts from Russia, the device for its niche is good and worthy of attention. At home, the gadget is in demand. It has a large bright display, modern design, good performance. 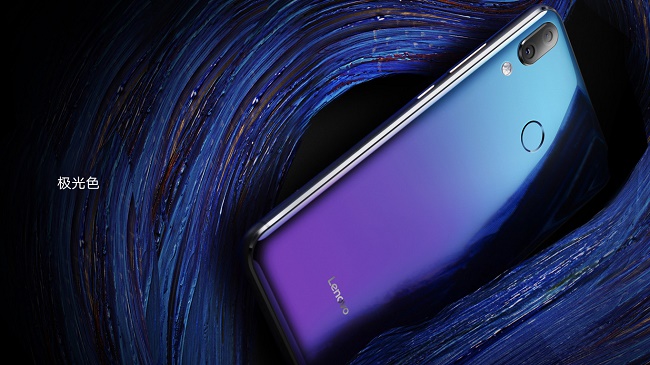 Important! The model is still being sold in its own home market and is not officially shipped to Russia. You can buy only through the Chinese Internet sites, taking care of the appropriate language firmware.

Recently, the manufacturer introduced advanced smartphone Lenovo Z5 Pro. From this model, this gadget differs form factor: made in the form of a slider. Lenovo Z5 Pro is more advanced: equipped with an NFC chip for carrying out contactless payment for goods and services, the system of recognition of the owner by face. Also, this model has received a Super AMOLED display with a diagonal of 6.39 inches and an aspect ratio of 19.5: 9, and its screen covers 95.06% of the front panel area.