At one time, Nokia was a pioneer in the field of mobile phones and was the most recognizable and best-selling brand. Then the policy of bending its line led to the temporary sale of the company, and today the Finns are returning to the market. It’s hard to say whether the company’s representatives managed to work on the mistakes of the past, but the 2018 Nokia novelties are interesting.

Among the new Nokia smartphones, the device that can be called looks curious the reincarnation of the 2006 model - Nokia 8110only in modern concept. The device has a metal frame and Gorilla Glass 5 on both sides. Both sides of the smartphone are curved and meet at the ends, forming a small strip only 2 mm thick. Due to this, it seems that the edges are sharper than a razor. The diagonal of the model is 5.5 inches, 2560 * 1440. Matrix - POLED. The device has a battery capacity of 3260 mAh and wireless charging. 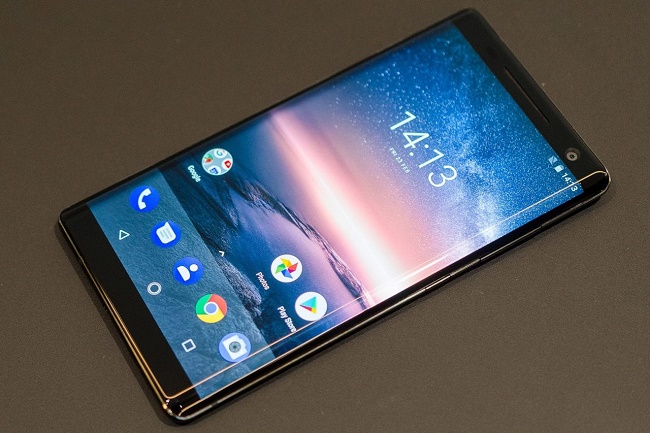 For hardware, the device has received almost all flagship characteristics, with the exception of the processor, they saved a little here and installed Snapdragon 835. Memory - 6/128 GB. There is IP67 moisture protection. Camera - Zeiss with optical zoom and two modules of 12 and 13 megapixels each. The model can record with two cameras at once, which is quite an interesting feature.

Important! OS - Android One, the most impersonal and naked version that Google has ever created, there is almost no pre-installed application, and users can customize the device as much as possible.

The price at the start of sales is 53 thousand rubles.

Given the fact that today the company is again trying to enter the market, the brand has to make a lot of effort to beat the competition. The company's flagship turned out to be at least interesting. The weak point is not the top-end processor, but this is not particularly scary, as the overall performance suffices. The device is not bigthat for modern devices is very unusual. The camera is great, the design also does not look like everyone else. In addition to this company did not make a patterned cut in the style of Apple despite the fact that the display is frameless. Of course, the model is worth a lot, and perhaps it’s scary to give that kind of money for the novelty of Nokia smartphones, given the fact that in recent years the company has clearly not shone.

8 Sirocco was greeted with irony, but 7 Plus was quickly named the best novelty of Nokia smartphones in 2018. The device has broken all sales ratings within the company and is really interesting.. Chipset - Snapdragon 660, modern FullView display, 6 inches, IPS, FHD +. Memory - 4/64 GB. The device looks very nice. The body is fully created 6000 series steel. Comes in white and black. To dilute the strict design, the side panels are made of bronze, and it looks very fresh.

Important! The body is not just metal, it consists of several layers and coatings. At the presentation, the device was dropped, scratched, beaten, and it remained intact without any scuffs. 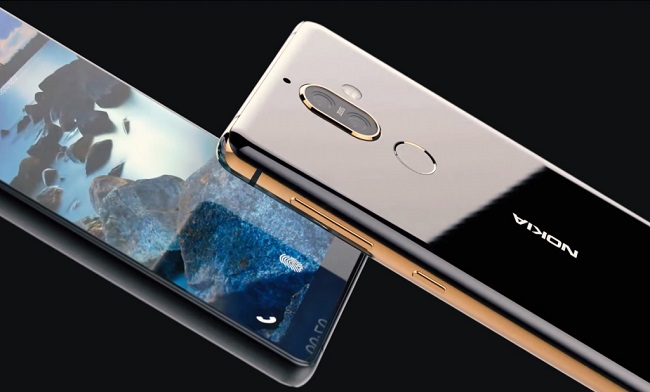 The camera repeats the one proposed in the flagship - Zeiss 12 + 13 Mp. Selfie camera - 16 MP. There is also a mode of simultaneous shooting on the main and frontal matrix. Battery - 3800 mAh. Price - from 24 thousand rubles.

It was said above that the model turned out to be interesting. Inside the company, the device is the best-selling one, but it has many strong competitors "on the side" with a similar price. The device is not the best player in the market, but far from the last.

Nokia 7 Plus on Yandex Market

In 2018, the company released a number of successful models, and among the new smartphones Nokia stands a budget unit. Nice that small phone. Its diagonal is only 4.5 inches. It is believed that such screens from famous manufacturers today is not enough. The device does not have high performance on the stuffing, there is a weak MediaTek 6737M, 1 and 8 GB of memory, a 5 megapixel camera, a battery - 2150 mAh.

An interesting device is not this. The device has removable plastic panels at a very low price, as well as a “bare” Android One, which, with a weak filling of a single Nokia, will allow, if not to fly, then to provide a very comfortable level of work. With all of the above, the device is not afraid of splashing, and this one of the cheapest waterproof smartphones of the year. Price - from 5 thousand rubles. 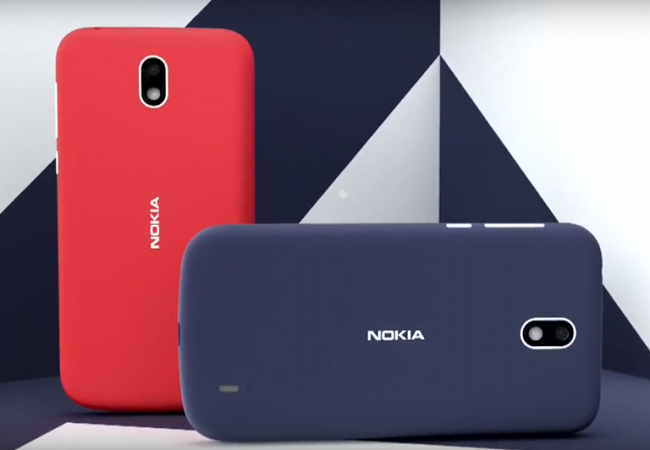 It’s stupid to expect something supernatural from a device for 5 thousand rubles, but sometimes it happens that without any expectations the phone is so bad that it’s impossible to work with it. Nokia 1 is not at all like this and at the same time it has a nice plus - protection against water.

Tip! For those who want to buy a quality and at the same time budget device - this is the best choice on the market. 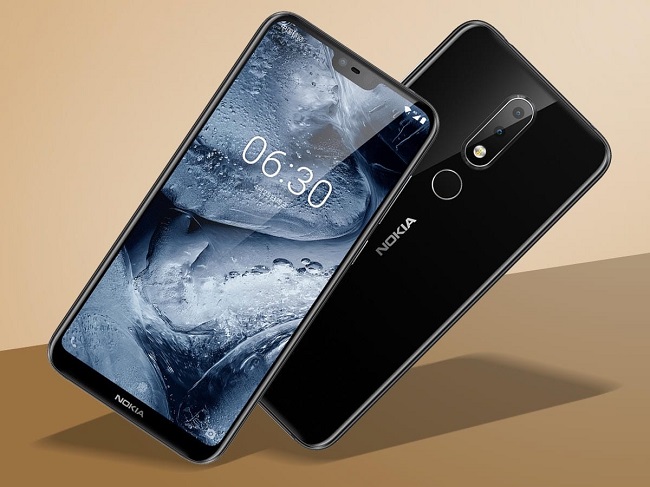 Important! This device can hardly be called good, since the only real plus model is performance. The chipset and memory will allow you to play, sit in the network and enjoy movies. The rest of the device is rather mediocre.

The design here is a template, it can be called quite good, but the picture is spoiled by a very large cutout under the front-facing camera. Second the weak point of the novelty is the battery. With a good amount in reviews, it is often mentioned that with active loads the device will be discharged after 6-8 hours of use, and for a modern smartphone it is very small.

Nokia 5.1 Plus on Yandex Market

In 2018, the brand owners understand that it will be difficult for them to fight in the expensive segment, so the main focus is on the average and low price tag. Above mentioned inexpensive Nokia 1. In the arsenal there is a slightly more decent device, which, unlike the younger smartphone captivates with design. The body is made of plastic and metal, there are three colors of execution - blue with copper edging around the camera, blue with gray edging and gray. The device is equipped with IPS matrix 5.5 inches with HD resolution. Responsible for the work is a nice Snapdragon 425 chipset for the price tag, under the case is hidden 1 and 8 GB of memory.The operating system is Android Oreo, a clean version without proprietary software. Battery - 4000 mAh. Camera - 8 MP, front camera - 5 MP. The glass is protected by Gorila Glass. Price - 7 thousand rubles. 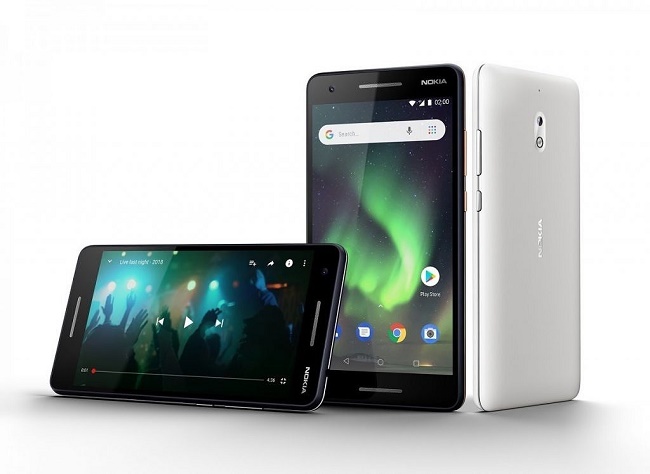 The device belongs to the budget segment, which explains the weak iron. At the same time for 7 thousand rubles it is quite possible to find models with a large amount of main and RAM. This is the weakest part of the novelty. Positioning - cool design, long work, and indeed it is.

Tip! All those who need a device in a pleasant design and with a large battery will enjoy the device. The rest should refrain from buying.

The strange moment is that the chipset in the updated device is installed quite well, but supplemented its only 1 GB of memory. Most likely, the manufacturer is counting on pure Android, which stands in almost all devices of the company in 2018. But if you compare different devices by numbers, the model fades against the background of competitors.

The expected novelty from the Finnish brand is the mysterious Nokia 9 device.Rumors about the model go since 2017, but there is practically no real facts. The model will be the flagship of the company, and therefore is of great interest. The latest news from the world of smartphones shed light on the novelty, but to say that everything will be really as it is said, it is impossible.

It became known that the device will receive the main camera with 5 matrices! It sounds fantastic, and it looks even more curious. It is difficult to argue how true the rumors are, but there is information that the information is official, and moreover, photos of the concept model that roam the network are also provided by official sources. 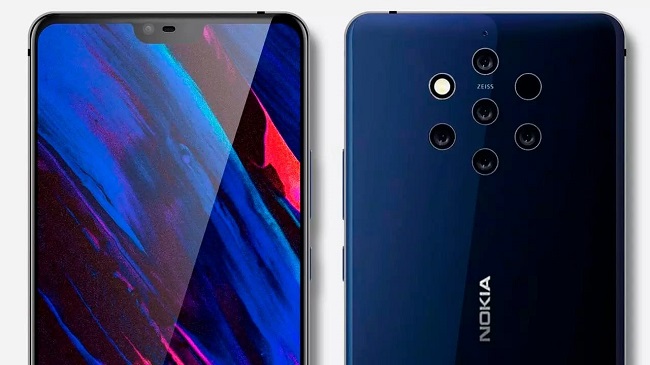 It’s hard to say why you need five sensors at once. With the three that are already on the market today, everything is more or less clear, but five looks like an obvious search. According to people who are knowledgeable in this area each sensor will have a different focal lengthThat will allow you to accurately determine the distance from the device to the subject. The output will be excellent photos.

On a note! In addition, the use of a large number of matrices may be associated with new features that were not previously in smartphones, for example, 3D shooting.

There is no other information about the device, so it remains only to speculate whether the engineers from Finland can bring the concept to mind and present the device in the form that is attributed to it now. Nokia 9 is a device that is expected, which means it will be evaluated to the fullest extent. In view of this, the company will have to try hard not to disappoint users.

Meizu Pro 6 Plus - a successful flagship or an attempt to wishful thinking?