Hydrolysis cleaning of the oven is done with water. This process is not automated, but it is not complicated at all and is easy to implement at home. This method is also called steam cleaning.

What is hydrolysis and how it happens

In the pan the oven is poured special hydrolytic fluid after which the device is closed and switched on again for a short time. When the oven warms up, steam starts to be released from the hot water, which can soften dried fat that adheres firmly to the sides of the appliance. The grease begins to drain into a special pan with water, although, if heavily soiled, such cleaning will most likely not be enough and you will have to resort to hand washing.

As a rule, equipment equipped with the function of hydrolysis cleaning is made from high-quality enamel,resistant to food acids. This is done in order to prevent the penetration of fat inside the device. Premium models are equipped program hydrolysis, that is, activation of the function by timer, as well as the ability to adjust its intensity and duration. 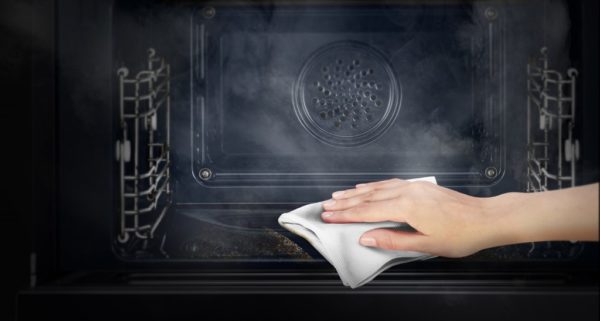 However, you should not hurry and consider this feature a thorough cleaning. Rather, it will be a preparation, because after steaming, the inner surface of the oven will still have to be wiped with a napkin or a damp cloth to remove the soaked dirt and grease. In general, hydrolysis is rather a method that facilitates plate cleaningbut does not replace it completely.

It is worth paying attention: the more often such treatment is carried out, the easier it will be to care for the stove (oven, grill, smokehouse).

As a rule, after the end of the steam treatment, the internal surface of the oven is wiped with a rag, the remaining liquid is removed and left to dry with the door ajar. The stove dries out in about an hour. 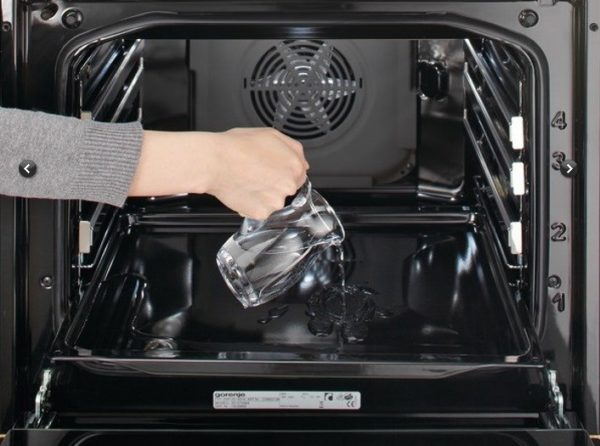 Despite the fact that such treatment is considered only as an additional and auxiliary cleaning, it has undoubted advantages:

Separately, it is worth considering the advantage of relatively low temperatures at which hydrolytic cleaning is performed. At moderate temperatures, the interior of the cabinet is not subjected to a strong effect; everything happens sparingly.

The minus of the considered type of cleaning can be considered narrow range of applications. Not every surface from which the ovens are made is designed for steam processing or active wet cleaning in a closed cycle, under pressure and at elevated temperatures. Most often, this model is a class above average. However, with a sufficiently detailed study of the market of ovens, you can find devices with low cost, which will be able to hydrolyze cleaning. To select the best model you should carefully study oven ratings 2017 and 2018.

A number of models have a function Cleaning, and requires the application of additional sprays that replace the effect of steam. This technology works according to the following principle: the oven heats up to a temperature of 90 degrees and holds it for 15 minutes, after which a beep sounds. Then spray is applied to the surface. The peculiarity consists in the fact that it is necessary to apply the agent rather quickly, in no less than five minutes, because the interior lighting of the cabinet is programmed only for this period. If you do not meet the set time, you can skip the hidden cavities. After completing the cleaning cycle, it is important, as in the case of hydrolysis, to clean the surface of the cabinet from dirt and excess liquid. 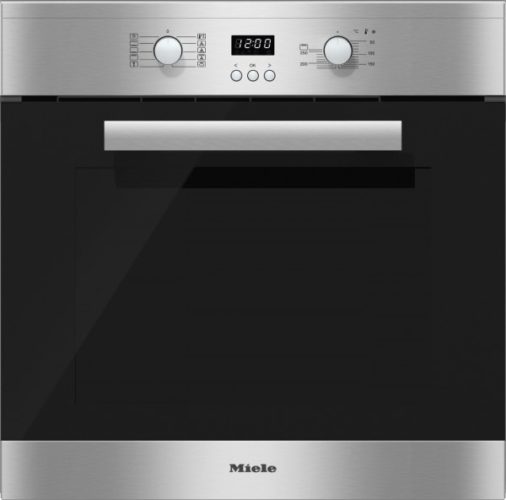 There are also devices with a function Aqua cleanthey work at low temperatures. To start the harvesting, a temperature of 50 degrees and approximately 0.5 liters of liquid are needed (ordinary water can also be used). The program runs for 30 minutes. After the system is automatically turned off, you can open the oven and wipe it, leaving it to dry with the door slightly open.

In hydrolysis, there are several types (types) of cleaning, however, there are no fundamental differences. All of them have similar principles of processing the inner surface of the oven and require further cleaning, despite the fact that it was the main component: steam, spray or water. 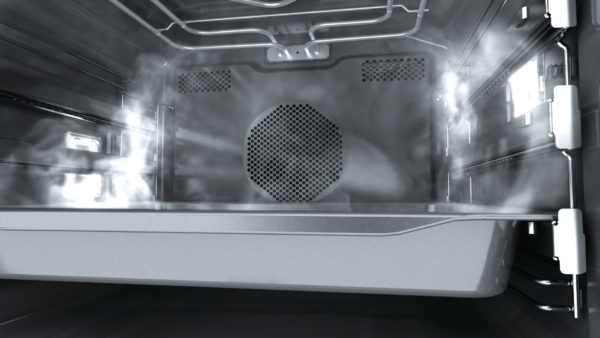 One of the most common and affordable cleaning methods on the market has been and remains hydrolysis, and it is he who is preferred by the majority of users of kitchen appliances. In addition, ease of use, reliability and the need for no additional funds make hydrolysis cleaning one of the most economical.

Today, there are many options for processing the oven, for example, catalytic and pyrolytichowever, it is the hydrolysis cleaning of the oven that is the most simple and popular. A number of manufacturers provide the option of hydrolysis in their models, so any demand is more likely to be satisfied. Thus, the hydrolysis option provided models of popular brands Bosch, Electrolux, Gorenje.

Ovens rating 2017, price and quality of various models. Comparison of cost, technical features and additional functions. Advantages and disadvantages of the best models.